In this section of the course, in several videos, you marked a few lines of code, and magically moved them into a preceeding block. For example, you put an Image “Catground” in a VStack, then marked the Image “Badge” lines and moved them into the VStack block.

How did you do that, what Control/Option/Command keys did you use ?

Thanks, in advance, and a Merry Christmas to you both.

Merry Christmas to you too!

I use the Move Line Up/Down commands a lot, using the Option-Command-bracket shortcuts. I believe I mentioned what I was pressing twice in this part, but not in the episode you noted.

I’m not sure what the optimal thing to do is, with video. I know I’ve personally felt like my time was wasted by a certain competing company’s approach, which is to always say keyboard shortcuts out loud. And some of us on the team have tried showing the shortcuts onscreen, but that also can be distracting. So, I’ve been going with, “mention keyboard shortcuts early in a course, but start leaving them off more and more in later episodes”. If you have a recommendation on a better approach, I’m all ears! 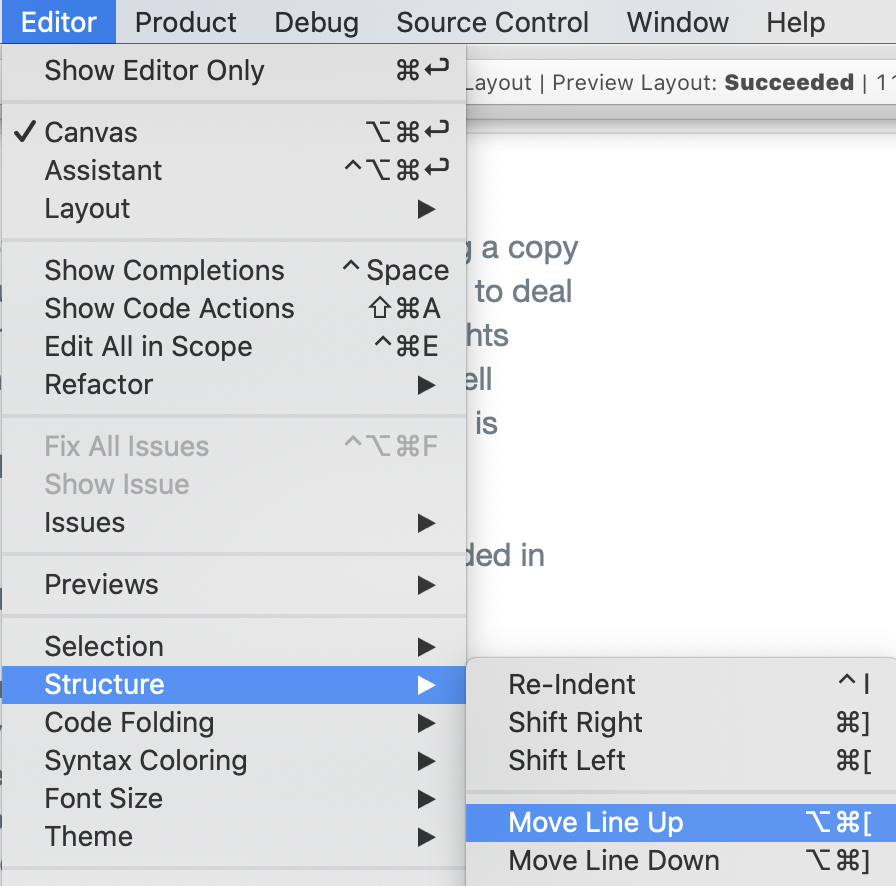 I think I actually heard your first mention of Option-Command-bracket, I tried it and it didn’t work.
The reason being, I’m in Berlin and have a german keyboard, where you have to press Option 5 & Option 6 to get [ & ] .
So my attempt of Option-Command-[ executed a Structure Shift Right !
However it works when applying through the menu item.

So I’ve just gone into XCode Preferences, Key Bindings and changed my shortcuts, so I can now use them.

Thanks for the help.

I think your approach is basically good. I managed to write down new shortcuts. I only really had a problem, due to this shortcut not being possible on a german keyboard.

That’s really enlightening to me. Thank you!

I bet that if I show the menu item the first time, that might help. I’ll try that in the next course.