Adding @MainActor to the function fixes the problem.

@peter.suwara as you can see from the author’s response above, beta versions of Xcode/Swift are understandably not supported. Beta versions may contain changes and incompatibilities, they may also change over time and create a moving target for updates. Xcode can run both release and beta versions in the system, please use the current release.

Ok, thanks for the update guys.

Thanks Robert. Also, how do I add an avatar picture to my profile?

I believe that this is picked up from your Gravatar:

Thanks @robertomachorro, I’ve updated my Gravatar

Seems like things will break in Swift 6. We shouldn’t be holding a reference to async code like this. I take it you know about this issue @icanzilb ? :

Sure Peter, I do know about this. RayWenderlich books receive updates, those are usually on a yearly basis — each edition targets a given Xcode/Swift version. If you open the book you will see it targets Xcode 13 and Swift 5.5 because these were the latest versions at the time this edition was produced. Any future editions will support the latest versions at the time those are made. Obviously since these new warnings were introduced, future editions will feature different code in the chapter you are referring to. I hope that helps

Xcode 14 is not in Beta anymore. And if warnings are not a big issue, missed @MainActor from initial post is an issue which breaks app, because no runloop → no timer. No timer → No messages

Hi @kolya-j ! Welcome to the Forum. Xcode was recently released and we are all exited about it. Having the expectation of books immediately after is tough, all books are updated continuously, but again, not immediate.

Hi @kolya-j as Roberto noted if the book says the content targets Xcode 13 that’s the version that is supported. A later edition will be specifically suited for Xcode 14.

That said, I’m using Xcode 14.1 here and I don’t see an issue with Chapter 4. We’ve done a round of updates to address readers feedback lately, can you have a look if the issue you have is resolved? If not, could you post a more detailed description so we can assess if that’s something we should address adhoc before the next edition?

I think I miss fact that book asks to use xcode 13.0. But now… thinking about code a bit more… It doesn’t matter which xcode you are using. Logical issue there not connected to xcode or iOS version.

What should happen:
We should start timer and timer called every second

Why it happens this way?

I honeslty beleive issue was there on xcode 13, 14 and will be on 14.1. At least this is my currenctt understanding of asyc code, I’m still reading the book, but already have some experience with it. 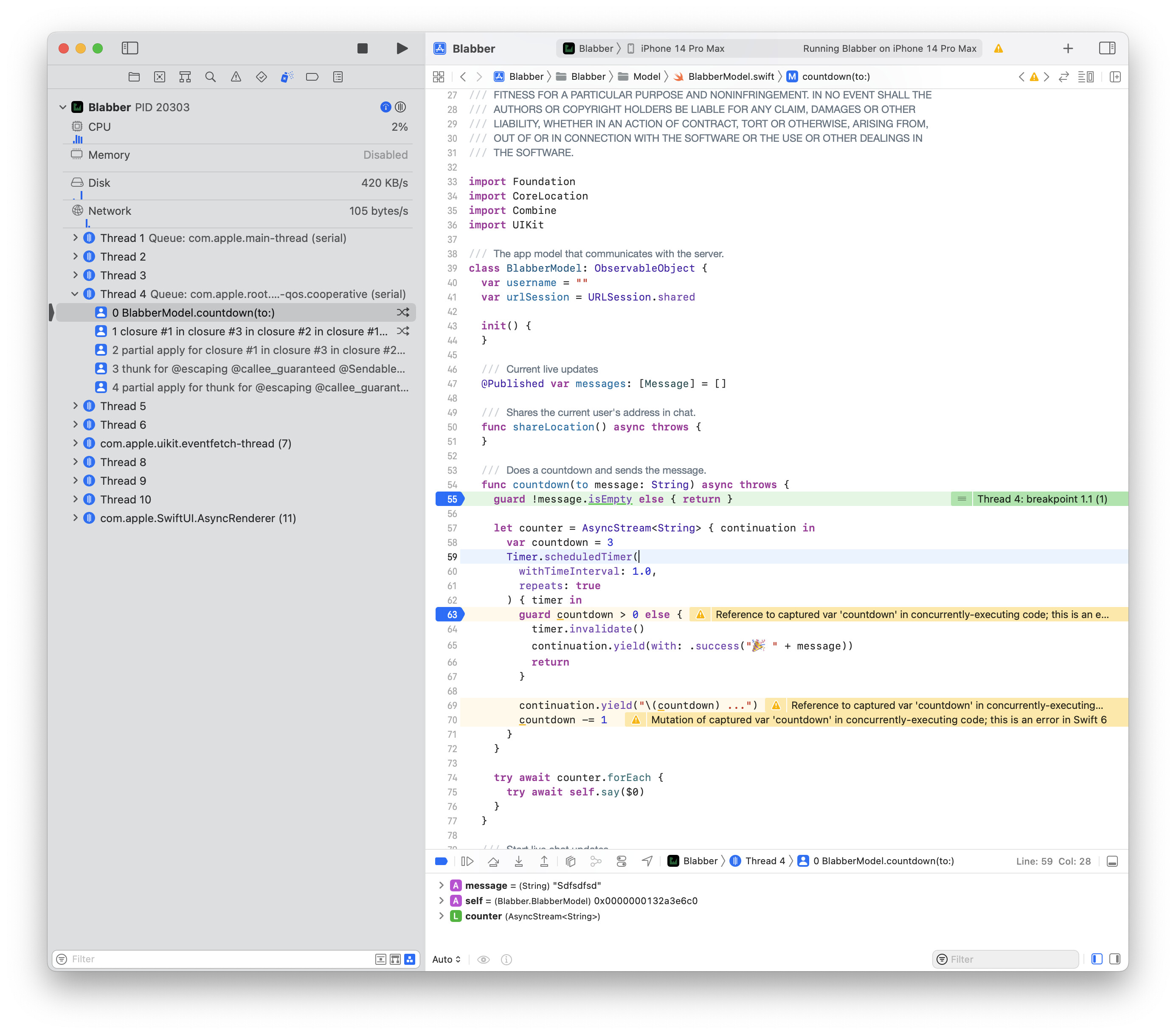 @kolya-j I see, that was helpful — I didn’t realize we’re talking about the final project. Now I can reproduce the issue and we’ll fix it. This must’ve been introduced in a recent Swift version — I don’t believe it’s possible that all of the editors and 1000s of readers didn’t notice this before.

I downloded xcode 13 and I can confitm, that it indeed works in last xcode 13. Which is suprise for me.
About fix, it also should be done in starter project because, countdown function exists in it already.

Thank you for your help!